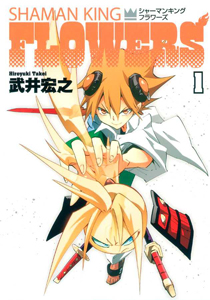 Like Father, Like Son...Except not really.
Shaman King: Flowers is a Sequel Series to the original Shaman King story.
Advertisement:

Set in the future, the series follows Yoh's heir, Asakura Hana, a shaman just recently coming into his powers. Unlike Yoh however, Hana is quite brash and doesn't see why he must carry on his family legacy. However plenty of surprises are headed his way such as two members in his family on Hao's side who wish to become the only main branch of the family, and of course a girl who's not unlike Anna.

A pilot of the series was drawn in 2009 but seems to have been retconned for the main series which started on April 2012.

Due to the end of the magazine Jump X, Flowers was effectively cancelled in October 2014. One final volume was released in December 2014 to conclude the story. The series was revived later in 2018 as Shaman King The Super Star along with a spin-off series, Shaman King Gaiden: Red Crimson, centering around a grown-up Horohoro and the past sins of the Tao family.

of the anime announced that the sequel series is in development, adapting the Flowers manga.