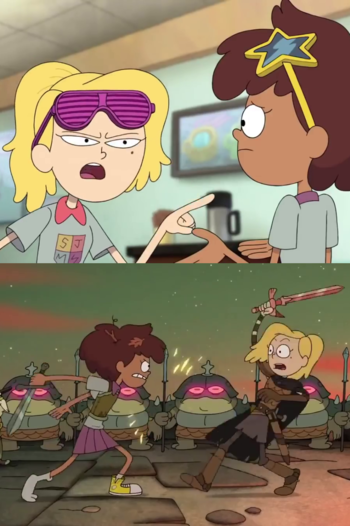 Anne takes standing up to someone with a Toxic Friend Influence to a whole new level.
"Catching my breath, letting it go,
Turning my cheek for the sake of the show.
Now that you know, this is my life!
I won't be told what's supposed to be right!"
— Kelly Clarkson, "Catch My Breath"
Advertisement:

Bob may have opinions, but he doesn't act on them if someone disagrees. Instead, he will follow their instructions or advice. This someone might be anyone, a single person that he is dependent on, or the prevailing attitudes in society. Then Bob starts to trust and act on his own judgment and begins to go his own way. Bob earlier had no independent judgment in relation to some external factor, and this is the growth and expression of his own judgment: he's growing a spine.

This is a form of Character Development, and often a defining moment in a Rite of Passage. It's also a staple of a Coming of Age Story, where it does not necessarily mean that Bob has more resolve than earlier, but rather that he has learned to follow his own independent judgments. It might be lousy judgment, but at least he has started to develop and act on it.

It might be caused by Post-Support Regret, as Bob has only been spineless with a Toxic Friend Influence who he believed to be a Jerk with a Heart of Gold, only to be betrayed by his friend and shown the Awful Truth, leading to a Broken Pedestal which motivates him to finally stand up to his Big Bad Friend.

As a trope, this can take two forms:

This trope is frequently seen in Coming of Age Story. Some starting points for this trope is the Extreme Doormat or Shrinking Violet, but the character might just be inexperienced and unsure of themselves. After all, this is all part of growing up. Calling the Old Man Out is a specific subtrope. May coincide with Took a Level in Badass, The Dog Bites Back, Challenging the Bully or Sudden Principled Stand. Has nothing to do with the evolution of vertebrate animals.

Fluttershy manages to assert herself to her pet bunny Angel when he refuses a plate of food she made for him rather than cater to his demands.

Fluttershy manages to assert herself to her pet bunny Angel when he refuses a plate of food she made for him rather than cater to his demands.