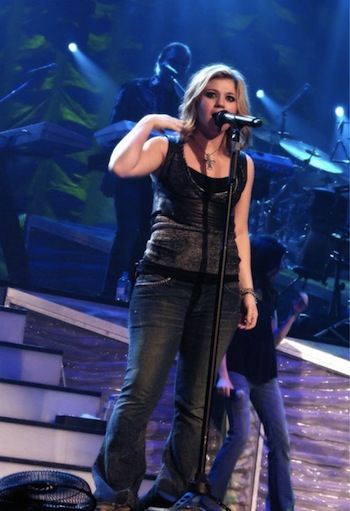 "Everyone says I'm like the girl next door. Y'all must have really weird neighbors!"
Advertisement:

Kelly Brianne (formerly Blackstock; born Kelly Brianne Clarkson, April 24, 1982), known professionally as Kelly Clarkson, is an American singer and the first winner of American Idol. Born in Fort Worth, Texas, after her parents divorced when she was six, Kelly was raised alone by her mother in Burleson, a small town near Dallas. She first learned she could sing in junior high when the choir teacher heard her singing in the hall and told her she should try out. In high school she starred in musical productions and after graduating she moved to Los Angeles in early 2002 to try a career in the music industry.

Unfortunately, record companies she sent demos to were either surprised to find out she was white when they met her or wanted her to lose twenty pounds (she's 5'3" and weighed 120 lbs.) and sign contracts that forced her into bubblegum pop. After a few months she returned to Texas dejected until a friend gave her an ad for a new singing competition series holding auditions in Dallas. With nothing else to lose she went to the auditions meeting Simon Cowell, Paula Abdul and Randy Jackson and was passed through to Hollywood, where she had just left. During the summer of 2002 she competed on live television with several other hopefuls in the inaugural season of American Idol: The Search For a Superstar. Kelly's belting voice and small town Southern charm got her voted through by viewers to the end when it was down to her and Justin Guarini. She was declared the winner and in a week her first single "A Moment Like This" had the fastest rise up the Billboard chart to number one since The Beatles. Unfortunately she and Justin were also forced into starring in the 2003 movie flop From Justin to Kelly.

Since winning in 2002, she has surprised skeptics by having a very successful music career, with five albums and two Grammys to her name. The popularity of her second album Breakaway and the single "Since U Been Gone" made her an international pop star and she has since toured around the world.note Clarkson is also the only American Idol winner (so far) to have had a British chart-topper, with "My Life Would Suck Without You." Her success as a former American Idol contestant has few rivals not named Carrie Underwood. Ten years after Idol she, along with Robin Thicke, Jennifer Nettles, and John Legend were mentoring and judging young hopefuls like herself on "Duets", an ABC singing competition show that aired during the summer of 2012. She also had the honor of singing "My Country, 'Tis of Thee" at Barack Obama's second inaugural ceremony.

In November 2012, she released her first Greatest Hits album, Chapter One.

In October 2013, she married Brandon Blackstock, the son of her manager Narvel, and stepson of Reba McEntire. Brandon had two children, a boy and girl from a previous marriage. In June 2014, she gave birth to their first child, a girl named River Rose. In April 2016, she had a son named Remington "Remy" Alexander.

Her song "My Life Would Suck Without You" is extremely popular for Shipping Fan Vids on YouTube. Name any pairing from any TV show, movie or Real Life, especially one that's Slap-Slap-Kiss, there's probably a video dedicated to them using this song.