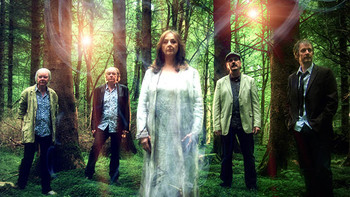 Clannad are an Irish family musical group consisting of three siblings and two of their uncles. Generally considered to be a Folk Music band, they also have considerable elements of New Age, especially in their later albums, and have occasionally dabbled in rock music.

They most well known for performing the theme song to the television series Harry's Game and all the music for the later television series Robin of Sherwood. Another sibling, Enya, was briefly also a member of the band before going solo and they have also recorded with Bono of U2. The band predates the visual novel CLANNAD by over twenty years having formed in 1970 and have released sixteen full studio albums during their career.

The band planned to make a farewell tour in 2020 but this has been delayed due to the Coronavirus pandemic.