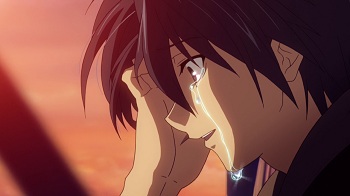 CLANNAD is where the characters quickly go from laughing to crying all within one episode.
Advertisement:

CLANNAD is a Key/Visual Arts game, and as such, features many emotional moments across both its seasons, even to point of being considered to have some of the most poignant and depressing ones ever. We're not kidding when we say you should bring tissues.