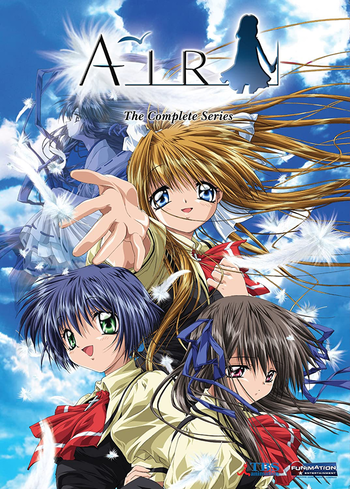 The young man is a traveler. He has two companions. One is a very old doll that walks without a hand touching it. The other is an ancient promise passed on to him by someone with great power.
Advertisement:

Kunisaki Yukito is a traveler running low on money who lives day-to-day by performing a telekinetic puppet show. His travels, however, have a deeper meaning, one he's been trying to push away: for a thousand years now, his family has been searching for a girl with a curse upon her. A series of girls in town - cute, immature Misuzu; sly, friendly Kano; and quiet, serene Minagi - present themselves as possible candidates to be this "girl in the sky", as they all have mysterious dreams of flying and connections to the spirit world that unfold along with their problems in the present day. If the girl isn't found and somehow saved, once she reaches a certain age or finds someone dear to her heart, she will become very ill, lose her memories, and die...

This is the story of AIR, an H-Game by Key/Visual Arts with a clean version; the original Visual Novel was released in 2000, and the clean version followed in 2001. It spawned two anime: a movie by Toei Animation and a TV series by Kyoto Animation, both of which were released in 2005. (It was actually the first of three Key games that were animated separately by these two studios, although the Toei version of Kanon came out first in 2002.) It is seen as and marketed as a companion to Kanon; both deal with a young man with little to go on who arrives in a new town, begins living with a girl upon arrival, and meets various other girls while sorting out the supernatural mystery of the town. The themes of fate and miracles also run deeply through both series.

The doujin Fighting Game Eternal Fighter Zero by Twilight Frontier features Misuzu, Kano and Minagi as playable characters, but it's notorious for also featuring Kanna, who became the resident SNK Boss, and became banned in Tournament Play due to her being a Game-Breaker.

Not to be confused with the French electronica duo, the graphic novel