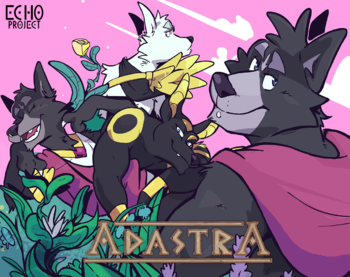 , who are also responsible for the Psychological Horror visual novel Echo and its standalone prequel The Smoke Room and sequel Arches as well as Glory Hounds.

The story follows your player character, a university student from Earth who was studying abroad in Rome, as he is (unintentionally) kidnapped by Amicus, the prince of a galactic wolf empire from the eponymous planet. Amicus finds himself in a power struggle where although he is next in line for the throne, he is challenged by his brother Cassius for the throne. Amicus believes bringing a human from Earth will impress his people and improve his reputation to give him an edge over his brother but things soon go wrong, very horribly and hilariously wrong. Space adventures, romance, and political hijinks ensue.

The project was completed in 2020 with a sequel titled Khemianote named after the planet that Neferu and the Khemians reside in which will be the setting for the story, in development with regular monthly scheduled updates. The latest versions and updates can be found on the Echo Project's Patreon page

which contains information and updates on all their current projects.

This visual novel contains graphic content, sex, and violence. As such, all external links on this page are to be considered NSFW unless stated otherwise.