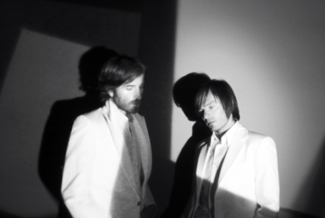 Air are a musical duo from Versailles, France, made up of Nicolas Godin and Jean-Benoît Dunckel. Formed in 1995, Air specialize in a very diverse form of Electronic Music, which has roots in 1970s electronica, film soundtracks, Psychedelic Rock, soft rock, Ambient and pure French pop.

Their debut EP, Premiers Symptômes (translates to "First Symptoms" in English) showed off their flair for ambient music with touches of dance-pop. Notably, it was partially made up of early versions of music that would eventually be part of their breakthrough album, Moon Safari, released in 1998. Moon Safari was an immaculately produced collection of ambient pop punctuated by old synthesizers, some surprisingly radio-ready singles and some collaborations with guest vocalist Beth Hirsch. Considered one of the best electronic releases of the 1990s, this made Air's career.

However, the two were ambitious producers, and the following years would see the duo redefine themselves, first by contributing the soundtrack of The Virgin Suicides in 2000 (featuring fan favorite "Playground Love"), and then following it up with another studio album in 2001, 10,000hz Legend. These albums were a little more challenging compared to their early music, with the soundtrack showing off a darker and more dramatic take on their sound. Likewise, 10,000hz Legend showed them emphasizing the electronic side of their music while slowing the pacing and retaining only a few familiar elements. It was a bit more of a challenge for fans.

Air continued to craft their sound with 2004's Talkie Walkie, which was a much brighter take on their recent efforts, and also saw the duo put more emphasis on their own vocals (as opposed to their use of vocoders in earlier works). Praised by critics as a return to form, it had some help in the production from Nigel Godrich (of Radiohead fame) and spawned some of their most famous songs, such as the single "Cherry Blossom Girl" and "Alone In Kyoto," the latter of which gained fame as part of the Lost in Translation soundtrack. 2007's Pocket Symphony saw the band add Japanese instruments to their repertoire, reemphasize their roots in ambient soundscapes, and collaborate with Jarvis Cocker from Pulp and Neil Hannon from The Divine Comedy. 2009 saw the group make their first full-length album at their new studio, Atlas Studio, with the title of the album being Love 2.

AIR stands for "Amour, Imagination, Rêve," which translates to "Love, Imagination, Dream." The band are often seen by critics as the second best export of electronic music from France (after Daft Punk, of course).note Or third, if older critics name Jean-Michel Jarre, a notorious 70's Electronic Music pioneer, who is also one of Air's main influences.

Moon Safari, still their most famous record, was re-released in 2008 with a book, a DVD and a second disc of rarities, live performances and remixes.