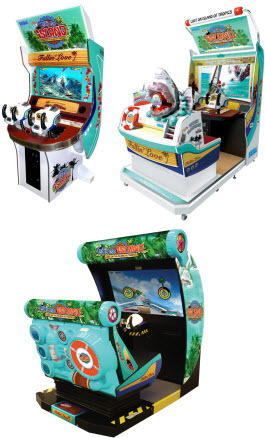 Let's Go Island: Lost In the Tropics is a Sega light gun sequel game to the 2009 game, Let's Go Jungle: Lost on the Island of Spice.

The game follows the story of Beth and her bumbling tour guide, Zack. While out on a boat tour around the island, pirates being chased by sharks crash into their boat and try to commandeer it. The two are thrown overboard and wash ashore on a tropical island, where the local wildlife has gone crazy. Beth and Zack must work together if they hope to escape the island.

The game follows many of the same conventions as the original games, mixing arcade shooting with Press X to Not Die segments with a few control tweaks. It is also notable for being the first 3D motion ride arcade produced by Sega. Even the 3D system used by the game is impressive, it used a 55" autostereoscopic display (basically, a scaled-up version of the Nintendo 3DS' lenticular LCD display), meaning unlike other 3D arcade attractions, no glasses are required to enjoy the 3D in this game.

2016 saw the release of the "Dream Version", essentially the same game only modified for the Dream Raiders arcade machine.