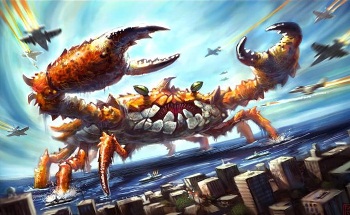 Holy crab! Where the hell is the weak point?!
Image

"Once... they were men. Now they are land crabs."
— Dr. Brewer, Attack of the Crab Monsters
Advertisement:

They've got big pincers. They've got googly eyes. They've got a thick exoskeleton. They've got a funny sideways walk. They're capable of living both on land and in water. In some parts of the world, they make delicious meals. In others, they name deadly diseases after them.

But what happens when you decide to enlarge one? You get a scary-looking monster fit for a Boss Battle. And possibly an extra-large delicious meal if you decide to cook it afterward.

Like Big Creepy-Crawlies, inefficient oxygen use renders the truly huge ones impossible. However, around 450 million years ago marine arthropods did grow to large sizes, up to 2.5 metres in the case of the Eurypterids.

This trope is named for a mid-2000s meme, where during a Sony presentation, the presenters claimed that Giant Enemy Crabs appeared in "famous battles that actually took place in ancient Japan". When encountering one, you may Attack Its Weak Point, especially if for massive damage while using Real-Time Weapon Change.

See Sea Monster for other monsters from the deep, and see Penny-Pinching Crab for other crabs. Often similar to a Giant Spider, but not quite as creepy (and theoretically, giant enemy crabs are more tasty). A mechanical version would be a form of Spider Tank. Can be found on an Isle of Giant Horrors. Subtrope of Dire Beast.

Other Crustaceans of Unusual Size