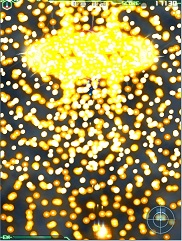 Fraxy is a Freeware arena Shoot 'Em Up that was released in 2006 for Windows PCs, and which centers around user-made content. The game comes with an editor that lets you make your own enemies, then lets you blow them to bits.
Advertisement:

It comprises of two modes: Free Play, which pits you against one or more of the available enemies and TRY, which gives the player different scenarios. The latter is not as popular, due to the fact that it's harder to make scenarios than enemies. An add-on that replaces sprites with custom ones exists, meaning you could make effectively anything.

Fraxy used to have several active wiki pages and communities; it no longer does, with many being abandoned or shut down. The original creator, Mon, has not updated his site

since 2015. Fraxy used to have a section on the ROM hacking forum board2; though the forum itself appears to have been shut down. Fraxy HQ

is currently the most reliable site for the game, containing working download links for the game

(Most player-made bosses referenced on this page are creations of FHQ members). Most activity on FHQ happens behind the scenes in chatrooms, making the community appear more dead than it is.