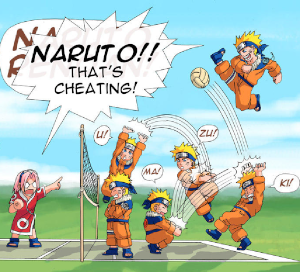 Of course he's cheating; there are only three hits in volleyball.note Art

"The Mirror Image Technique"
This allows you to split your body into two bodies. This can help you against many enemies. However, remember that your strength will be half of what it normally is, so use this technique with caution.
— Snippet from Shurikit's Scroll, The Legendary Starfy
Advertisement:

Similar to Doppelgänger Spin, Doppelganger Attack involves making multiple copies of oneself, during combat. Unlike the former, however, the "copies" are actual physical copies, be they manifestations of energy, split off from the original, or copies made of stone, clay, or another material. As they are solid copies, there is no "which one is the real one" game to be played here: They're essentially all "real", and all dangerous. They can be used to attack, train, or defend the original. If the copies are unable to rejoin with the original after being created or summoned, they may have the Cloning Blues.

While they are all solid, often the summoned copies are much weaker than the original, and can be killed more quickly. The major difference between this and Doppelgänger Spin is that the doppelgangers are able to attack, even if they can be destroyed by being hit once or twice. Sometimes making more copies makes the original opponent weaker, due to the Conservation of Ninjutsu. In fact, Ninja-theme characters in Toku are frequently an example of both these tropes.

Compare Doppelgänger Spin, Me's a Crowd, and Weaponized Offspring. Expect lots of Power Perversion Potential. If the Doppelganger attacking is of the player, it's a Mirror Boss.