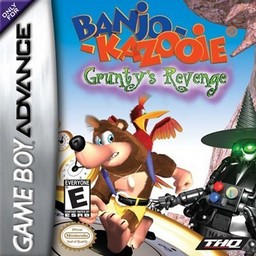 Banjo and Kazooie go back(pack) in time.
"With the Mecha-Grunty Klungo's made, Banjo's favor will be repaid. I'll steal Kazooie, and in a blast, I'll use my suit to change the past. Without his bird, Banjo's lost. I won't give up at any cost!"
—Mecha-Grunty
Advertisement:

Banjo-Kazooie: Grunty's Revenge is a Platform Game developed by Rare (and published by THQ) that released on the Game Boy Advance in 2003. The third game in the Banjo-Kazooie series, the title is an Interquel set shortly after Gruntilda's defeat in Banjo-Kazooie but before her revival in Banjo-Tooie. Being on a handheld system, the game is much smaller in scale in comparison to the console entries, but manages to maintain much of the series' trademark style and feel.

After failing to lift the heavy boulder off of Gruntilda, her henchman Klungo builds a robotic body to house her soul until Gruntilda's sisters arrive to save her. Mecha-Grunty then devises a plan to stop Banjo and Kazooie from ever defeating her in the first place; she travels back in time and kidnaps Kazooie to prevent her and Banjo from ever meeting. Unfortunately for her, Mumbo the shaman sees it all happen and sends Banjo back in time to chase after Grunty, foil her evil plot, and rescue his friend.

Sadly, the game came out after Microsoft's purchase of Rare in 2001 and suffered from poor marketing issues, resulting in many fans of the series being unaware of its existence. That being said, even fans that are aware of the game tend to overlook it, while most critics are of the opinion that it's merely So Okay, It's Average.