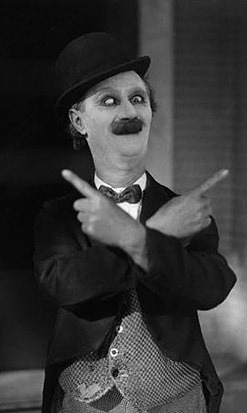 People with crossed eyes or taking on a crossed eyes expression are a Stock Joke in popular culture. They are either seen as silly, crazy or stupid. Whenever they appear you may rest assured that they will see double, accidentally drop something out of their hands or speak with a goofy voice. Can be combined with a Maniac Tongue sticking out from under their lips. May also cross into the Uncanny Valley sometimes.

In Real Life strabismus is a serious condition and poking fun of it is likely to offend some people, as it's a relatively common disorder. Despite this it's still an Acceptable Hard Luck Target in most circles, and mockery of strabismus is surprisingly common even in modern media.

They may also be shown to see double, note that this isn't always the case in real life, especially for people who have had strabismus since early childhood, as their brain has usually adapted by ignoring the image coming from the deviating eye.