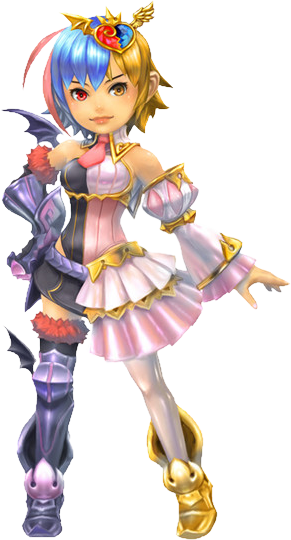 If a character has an element of duality to their nature, such as a Superpowered Evil Side, mixed-species ancestry, result of a Fusion Dance, a Split Personality, mastery of Yin-Yang Bomb, or even something as simple as a Tsundere's two distinct moods, this duality can be foreshadowed or visually reinforced by introducing a dual nature to their visual design. Whether it's two-tone clothes, mismatched eyes, or hair that changes color at the part, the two sides of their character come out in their appearance.

This aesthetic link can be a rule of the universe, such as all werewolves having a brown eye and a blue eye, or a fortuitous in-universe coincidence. Not every case of duality in appearance is part of a greater motif for the character—and would thus not be this trope—but if attention is drawn to both the outward and inward sides, particularly if by another character, then there's little doubt that the former is there to draw emphasis to the latter.

A Duality Motif is inherently limited to single characters, with many other tropes covering visual contrast between characters. The one exception is when two people form The Dividual—including Single-Minded Twins—the contrast between the two bodies can highlight contrast in the shared personality.

Commonplace for the Liminal Being and sometimes appear during Liminal Time.

◊ in his face that may have implied the theological concept of the Hypostatic Union.

See Peek-a-Bangs and Two-Faced for visual designs that can be—but are not always—used for this effect.