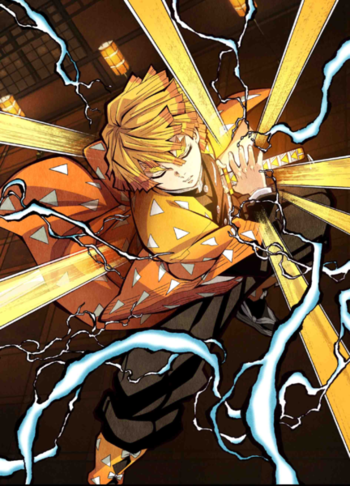 "Thunder Breathing: First Form - Thunderclap and Flash"
One of the oldest themes and concepts in myth or storytelling is the idea of the elements, the forces of nature that make up the world around us. Some can control these elements, and those who do are often going to be strongly associated with whatever element they master. However, what about people who are just associated with these elements?
Advertisement:

That's where the Elemental Motif comes in. Instead of just controlling the elements, these things are highly associated with these elements — and the story makes sure to point it out. From characters, to objects, to fighting styles, and anything and everything in between, there can be a deep and often metaphorical association with a specific element. After all, a lot can be said about something or someone by comparing it to an element, just as a lot can be said with comparisons to animals or colors. What is being said, however, depends on the subject.

The association can be positive or negative, regardless of whatever element is being used. To name a few...

These associations can also range from being obvious to subtle, and from deep to shallow, so long as there is an intentional connection there, and it's meaningful to the story in some way. For these reasons, these themes can apply to anyone or anything, just as long as it's not about some form of elemental control. After all, it's almost expected for people with magical control over the elements to be heavily associated with their elements, and this trope is concerned more with the metaphorical and figurative side of things than the literal.

It can still come from a supernatural source, however — such as a nation that worships an elemental deity, while the people of the nation themselves typically lack any sort of magical abilities of their own. If these nations do have a few individuals with elemental powers, the nation itself can still count for this trope if a majority of it's inhabitants do not and simply have the association, instead. Those powered-up individuals, on the other hand, would not count on their own, unless the association isn't based around them having powers, is about a power besides what they have, or is otherwise a separate beast.

Compare, of course, to Personality Powers and Elemental Powers, as well as Color Motif, which may overlap. Night and Day Duo may also overlap, as well as Fire/Water Juxtaposition. Compare and Contrast Elemental Embodiment, when a character is that element.