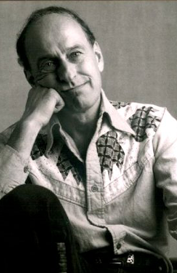 "I see myself as a novelist, period. I mean, the material I work with is what is classified as science fiction and fantasy, and I really don't think about these things when I'm writing. I'm just thinking about telling a story and developing my characters."
Advertisement:

Roger Joseph Zelazny (May 13, 1937 – June 14, 1995) was an American Speculative Fiction writer who loved to blur the boundaries between Science Fiction and Fantasy. He is best remembered for his series, The Chronicles of Amber, but he wrote much, much more.

He began during the early days of the New Wave Science Fiction movement, in the mid 1960s, and while he never identified with that movement, he did share its interest in literary technique. He wrote in a style that veered wildly between the flowery prose of high fantasy and the mundane prose of everyday life—the former to give his readers a sense of wonder; the latter to draw them in and make them feel a part of the story, and, often, to add a touch of humor. Together with New Wave authors like Michael Moorcock, he helped redefine modern fantasy.

Early in his career, he developed a reputation for writing mythology-based SF. His first novel, This Immortal (originally, Call Me Conrad) borrowed from Greek Mythology, and Lord of Light and Creatures of Light and Darkness were based on Hindu and Egyptian Mythology, respectively. He quickly branched out into more general forms of Science Fantasy, while still relying heavily on archetypal themes, like the Tarot and the conflict with Chaos in The Chronicles of Amber. He did return to his mythological-SF roots with two later works: Eye of Cat (Native American Mythology), and The Mask of Loki (Norse Mythology).

Zelazny engaged in several collaborations, including works created with Philip K. Dick, Robert Sheckley and Alfred Bester. His last two novels, Donnerjack and Lord Demon, were completed posthumously by friend and mentee Jane Lindskold. An anthology, Lord of the Fantastic, was put together after his death in his honor, showcasing short pieces by authors inspired by his work.

His Post-apocalyptic novel Damnation Alley lent its title (but little else) to a 1977 film. His short story "The Last Defender of Camelot" was adapted (by George R. R. Martin) for an episode of The Twilight Zone (1985).

For biographical details and analysis, see the analysis page.

Roger Zelazny's works with their own trope pages include: