Literature / Creatures of Light and Darkness 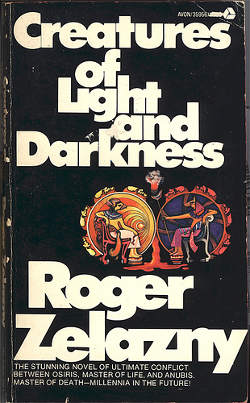 "Now, some say her name is Mercy, and others say it's Lust. Her secret name is Isis. Her secret soul is Dust."
Advertisement:

Creatures of Light and Darkness is an interstellar Science Fantasy novel by Roger Zelazny. It combines Egyptian Gods with standard Science Fiction themes to produce a truly unusual work.

At opposite ends of the universe lie the House of Death, ruled by Anubis, and the House of Life, ruled by Osiris. Between lie the Middle Worlds, where mankind flies between the stars in mighty spaceships, and colonizes countless worlds. All in the Middle Worlds are subject to the tides of Life and Death, except the Three Hundred Immortals.

Anubis has spent a thousand years training a champion chosen from among those who dwell in the House of Death, and now this champion has mastered the arts of combat and Temporal Fugue. Anubis gives him a name, Wakim, and sends him forth to hunt down and destroy one of these immortals, The Prince Who Was A Thousand. Learning of this, Osiris decides that he should be the one to kill The Prince, so he dispatches his son, Horus. Meanwhile, on the world of Blis, medical technology and bio-enhancement are causing the tides of Life to approach critical mass...

Creatures of Light and Darkness is a Fantasy novel filled with Science Fiction tropes; almost the reverse of Zelazny's previous novel, Lord of Light, which was more-or-less a Science Fiction novel filled with Fantasy tropes. Though completely unrelated, the two works are often considered companion pieces. It is also one of Zelazny's most experimental and bizarre works, in terms of style. In fact, it actually started as a literal experiment. Zelazny intended it as a writing exercise where he could try out different techniques and approaches. His friend, fellow author Samuel R. Delany, finally persuaded him to publish it, and the book is dedicated to Delany.