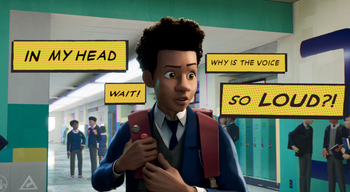 "My best guess is Ang Lee wanted to create the closest thing he could to a comic book, meaning the film literally has panels, speed lines, and elements of space and time overlapping each other. There's just one problem with that, though. If you're adapting a book, would you constantly put words all over the goddamn place? This is way too friggin' literal!"
— The Nostalgia Critic's review of Hulk
Advertisement:

A work in one medium, that heavily relies on the unique quirks of another, different medium, as if it's trying to remind us all the time that the story is just adapted from another form.

It might happen because the original work is so famous that everyone will think about it in that format anyways: The Bible is a book, Romeo and Juliet is a theater play, Citizen Kane is a movie, Looney Tunes is a series of animated cartoons, and Super Mario Bros. is a video game. If you are making an adaptation of these, your audience won't be fooled into believing that they are watching an equal version to the original, so you might as well stylistically remind everyone that yes, this is a mere imitation of the real deal.

Another cause might be that the original format influences the plot so heavily that it simply wouldn't work in the other format.

Yet, it isn't necessarily an adaptation trope. Maybe the work is just heavily inspired by another medium, and this is why it may try posing as an example, without actually being adapted from it. For example, a television series that is all about how awesome reading is might have "chapters" instead of "episodes", or an anime about video games might have "levels".

Common versions, with their usual traits: