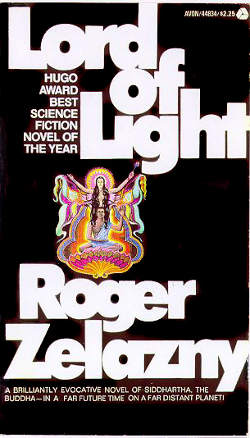 His followers called him Mahasamatman and said he was a god. He preferred to drop the Maha- and the -atman, however, and called himself Sam. He never claimed to be a god. But then he never claimed not to be a god. Circumstances being what they were, neither admission could be of any benefit.
Advertisement:

Lord of Light is a 1967 Hugo Award-winning Science Fantasy novel by Roger Zelazny, famously pushing the boundaries of the genre by leaning heavily on the Fantasy aspects.

On a far-future Lost Colony, the original crew of the Colony Ship have all somehow gained psychic powers. Using these plus rigorous controls on technology, they have set themselves up as the Gods of Hindu Mythology, and absolute rulers of the world, with Brahma, Vishnu and Shiva at their head. One of the original crew—the man known as Sam—is not satisfied with this state of affairs, and decides to start a rebellion, taking the identity of Buddha.

The novel is more-or-less Science Fiction, but relies heavily on Fantasy tropes. Zelazny's follow-up novel, Creatures of Light and Darkness, is almost exactly the opposite, a Fantasy (with Egyptian Gods) full of Science Fiction tropes. Though unrelated, the two works are often considered companion pieces. Lord of Light remains one of Zelazny's most popular and respected works. It also inspired a song by Hawkwind.

A film adaption of the book featuring concept art by Jack Kirby was planned in the 1970s, but ran into significant production issues. The script was later retooled into a more original story titled Argo, which suffered similar issues. In 1980, Argo's stagnant production was co-opted by the CIA as part of an operation to rescue a group of American diplomats during the Iran Hostage Crisis; these events were later dramatized in the 2012 Ben Affleck movie of the same name.

Lord Of Light contains examples of: