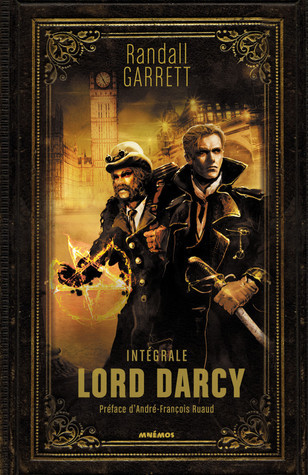 Fantasy/Detective series written by Randall Garrett in the 1960s and 1970s, set in an Alternate History with two major branches from our own:

As a result, in the 1970s, the Angevin Empire's society and technology largely resemble those of, to pick a comparison entirely at random, the Sherlock Holmes stories. But with wizards.

Lord Darcy is an official investigator for His Highness the Duke of Normandy, solving mysteries too weird or too politically sensitive for the normal police to handle. He is ably assisted by Master Sorcerer Sean O Lochlainn, a one-man magical CSI department.

In the later stories, Lord Darcy and Master Sean increasingly often become entangled in the espionage and counter-espionage of their world's version of the Cold War, between the Angevin Empire and the ambitious-but-not-strong-enough-to-wage-conventional-war Polish Empire.

Lord Darcy was introduced in 1964. Murder and Magic (1979) and Lord Darcy Investigates (1981) collect all of the Lord Darcy stories, bar two that were published later. Garrett also wrote one Lord Darcy novel, Too Many Magicians (1966), which fits between. A 2002 omnibus edition collects all three books and the two stray stories.

Alternative Title(s): Too Many Magicians