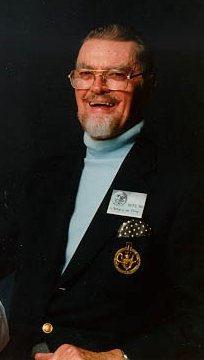 Lyon Sprague de Camp (1907 – 2000) was an American author. His notable works include the Time Travel novel Lest Darkness Fall and the Harold Shea series. He was a major contributor to the Conan the Barbarian series after it Outlived Its Creator.

He received lifetime achievement awards from the World Science Fiction Society (which runs the Hugo Award), the Science Fiction and Fantasy Writers of America (which run the Nebula Award), and the organisers of the Sidewise Award for Alternate History.

He was a friend of Isaac Asimov, and Geoffrey Avalon, one of the characters in Asimov's Black Widowers series, is modelled on him.

Works by L. Sprague de Camp with their own trope pages include:

Other works by L. Sprague de Camp provide examples of: