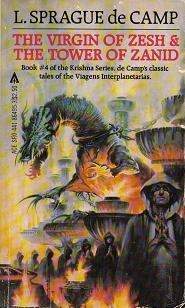 Zounds! Zomebody liked Zees.
Viagens Interplanetarias is a science fiction setting devised by L. Sprague de Camp, who wrote numerous novels and short stories in it, including Rogue Queen, one of de Camp's best known and most influential novels.
Advertisement:

In this setting, travel to other worlds is possible but not easy, and is supervised by an organization called Viagens Interplanetarias.note Portuguese for "Interplanetary Voyages" — the organization is based in Brazil, which is the world's leading superpower at this time. Several planets with intelligent life have been found; many of the stories feature the planets humans call Krishna and Vishnu, orbiting the star Tau Ceti.

The mode of the stories is an attempt to reconstruct Space Opera and Planetary Romance with more realistic premises: thus, a human may have an adventure in which he and a scantily-clad alien princess fall in love, but they're not going to be able to have children and he didn't get to her planet using any kind of hyperdrive or teleportation.