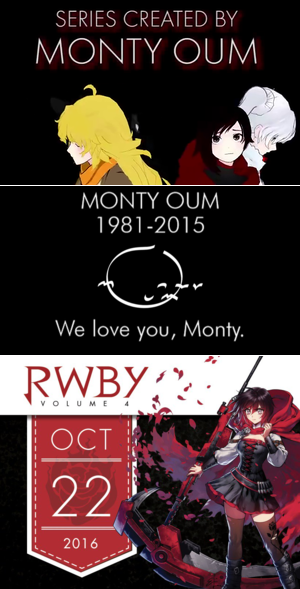 If a series becomes popular enough, not even the creator's death can stop it. If a series keeps going after its original creator has died, then it has Outlived Its Creator.

Series that continue on after the creator's death are the ultimate Franchise Zombies. A deceased creator cannot complain about any changes to the casting, style or creative direction of the series.

A series that has outlived its creator can (and often is) put through retcons, Character Derailment, Executive Meddling, etc. Sometimes this is simply for financial reasons; other times, it's because the current series-runner is also Running the Asylum. Or the creator passed on the torch before death. It can even be accidental.

When a series outlives its creator, the fans usually watch whoever's continuing it like vultures, waiting to swoop down and proclaim, "They Changed It, Now It Sucks!" On the other hand, if the original creator had Protection from Editors and was driving the series into the floor, this may be good for the franchise: there's a chance for the series to be turned around. If the creator is still alive, but the work continues to be made without his or her involvement, it becomes God Does Not Own This World. See also Character Outlives Actor.

And half-mentions for the following, which were created by more than one author and have outlived at least one: