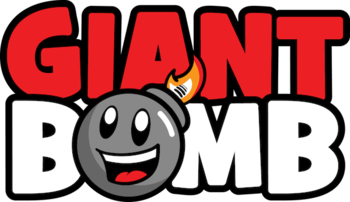 "I almost want to get into League out of spite."
— Jeff Gerstmann
Advertisement:

On his blog on March 5, 2008, and again on a broadcast of X-Play, Jeff Gerstmann, best known for his role in the Kane & Lynch debacle at Gamespot in 2007 (long story short — he was fired, essentially for giving an overly negative review to a game heavily featured in Gamespot advertising), revealed that he and Ryan Davis, an editor who had resigned in the aftermath of the review debacle, had joined forces to create a new gaming website called Giant Bomb.

Vinny Caravella and Brad Shoemaker, two other resigning Gamespot editors, joined them soon afterward, with Alex Navarro (again, of Gamespot), Drew Scanlon, Dan Ryckert, and Jason Oestreicher (not of Gamespot) having joined since. The site started as a simple blog while the actual layout was being constructed. It is now, in addition to featuring reviews and industry news, a wiki for anything related to gaming.

for movies (since folded into Moviefone), Anime Vice

for anime and manga (site has folded, although fourms still exist; link goes to YouTube page), and Comic Vine

for comic books. As well as Tested

which is not a media site but rather a foundry for technology inclined news. These websites, including Giant Bomb, were collected under the Whiskey Media banner. In March 2012, the Whiskey Media sites were sold to various companies, with Giant Bomb and Comic Vine being sold to CBS Interactive, which also owns Gamespot. The staff and site stayed the same, only the ownership changed. The site was sold again to Red Ventures in late 2020.

Not related to Big, Bulky Bomb.