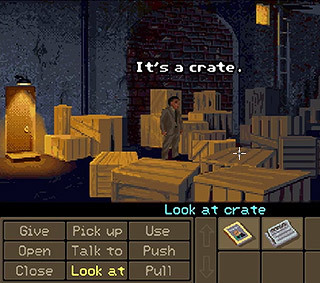 Maybe the Ark is in there somewhere...
"Ah, the crate. As seen in everything."
— Comic Book Guy, The Simpsons Game
Advertisement:

The crate is extremely common

in video games, even if you rarely see them in real life. Some games have entire warehouse levels filled with these crates. And for a good reason: they're so convenient and multipurpose they are literally building blocks for lots of gameplay elements and even entire genres.

Crates may allow players to hide from patrolling Mooks or shelter from enemy fire.

Crates can often be broken open to reveal a Power-Up or treasure, though usually only one per crate and much smaller than the crate itself. (It's a mystery why even small objects get a whole crate and surprising that most of the items manage to stay at the center of the crate. It is never explained why the item is always in perfect condition no matter how fragile it is and how violently you smashed open the crate.) Finding money and items in a nearby crate can help defuse the Money Spider problem: players wonder why the giant spider was carrying 31 gold pieces, lacking such amenities as pockets, but are often happy to loot the crate in its lair.

Crates are sometimes filled with explosive, blowing up in the face of players conditioned to bash everything breakable with a crowbar. Such crates can be quite helpful, however, if shot while an enemy is standing next to them.

Crates are often arrayed to form a Container Maze, or feature in Block Puzzles, where they must be slid or carried into place, to hold switches down or to form a staircase to otherwise inaccessible areas. Wreaking Havok often involves throwing crates around.

Crates are easy to render in 3D: six flat sides that can take a flat texture without causing too much comment (their simplicity also makes them one of the first objects 3D modelers-in-training learn to make, if not the first). When standing up, crates are likewise easy to create in 2D graphics: their proportions can be scaled to a predetermined tile size, and hit detection is simple for rectangular objects. This adds to their popularity with game developers since the earliest days of computer gaming. They are generally popular with players, too, who are willing to overlook such things as big crates behind small doors and a general absence of pallets and forklifts. Plus, it gives them something to smack around with their melee weapon besides enemies.

In some games (particularly pirate-themed ones), rectilinear crates are replaced with old-fashioned wooden barrels. The curvature of barrels makes them a bit less space-filling and more amenable to being rolled than being pushed around, but they're just as good for containing items, loading with explosives or tossing at enemies.

In short, crates satisfy three of our basic monkey drives: climbing, finding things to eat, and breaking things. They are so widely used that humor website Old Man Murray coined the term "Start-to-Crate", referring to the length of time between starting a game and encountering the first crate or barrel - most games don't rate especially high. Tropes Are Tools: crates have too many gameplay uses to ever die.