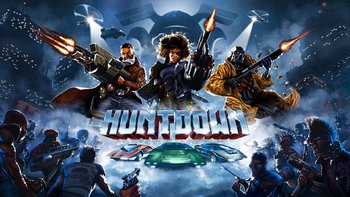 In the mayhem-filled streets of the future where criminal gangs rule and cops fear to tread, only the bounty hunters can free the city from the corrupt fist of felony. Lay waste to the criminal underworld and make a killing in this hard-boiled action comedy arcade shooter.

Huntdown is an action comedy arcade-style shooter developed by Swedish independent video game studio Easy Trigger Games and published by Coffee Stain Publishing. You play as one of three bounty hunters who are tasked to bringing down the gangs. It's up to three bounty hunters to take on these gangs to clean the streets. They are the hot-blooded and unpredictable Anna Conda, the battle-scarred cyberborg John Sawyer, and the cold, calculative Mow Man. The gangs who rule over the city are the rebellious and uncontrollable Hoodlum Dolls, the hockey-loving Misconducts, the motorcycle-riding Heatseakers, and the martial arts-trained NO.1 Suspects. The bounty hunters must fight these gangs on their own turfs to beat them and their leaders to reclaim their bounties. There are several weapons to take and use through each level that are scattered and at the end of each level you face the boss. You play solo or play with a friend in co-op. It released on May 12, 2020 for the PC via Epic Games Store, as a timed exclusive, PlayStation 4, Xbox One, and Switch. The game later ported to Steam on May 12, 2021 with new features like online co-op.