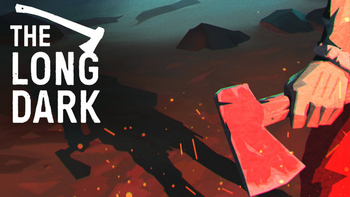 How will you face this quiet apocalypse?
Advertisement:

The Long Dark is an immersive first-person Survival Sandbox and the debut title from Canadian independent developer Hinterland. The game contains certain elements of survival horror stemming from the atmospheric nature of the game and the natural dangers that the player faces. The game is more grounded in reality than most other games in the genre. The game's Steam page emphasizes the fact that there are no zombies, only you vs. the wilderness.

The player must survive in the wilds of northern Canada in the depths of winter after they fall victim to a plane crash. There are several species of wildlife currently implemented, including the hostile wolves and bears which pose a threat to the player. The game features other challenges in the form of hunger, thirst, and, of course, the bitter cold.

The Early Access build of the game focused on the sandbox survival mode with no win conditions, plus a number of challenge modes with various win conditions. The full release version of the game also features a 5-episode story mode campaign. The map is pre-made rather than being procedurally generated, but the placement of items is random.

The four difficulty levels alter the challenge in significant ways. In Pilgrim (Easy), you are more of an explorer with no wolves attacking you. Just you having the world to explore without danger. Voyageur (Medium) is more balanced where you are part hunter, part survivor and face a reasonable challenge in the game. Stalker (Hard) is where nearly everything is trying to kill you around every corner. Interloper (Hardest) is an extreme challenge where only a small amount of supplies are available on the entire map.

The Long Dark was released in alpha form for Steam Early Access on September 22, 2014. It was finally released in full on August 1, 2017, with the first 2 episodes of the story campaign unlocked on release, Episode three was released October 22, 2019 with the remaining episodes to be released at a later date.

The story itself focuses on two characters, Will McKenzie and Astrid Greenwood, a pilot and a doctor, respectively, who were once married and have since gone their separate ways....until one cold, snowy night when Astrid suddenly shows up at Will's front door with a locked hardcase and a request to be flown to Great Bear, a remote, nearly uninhabited region of the Canadian Wilderness. The two take flight in Will's plane against a worsening storm...but while en route a bright green aurora flares up from the north and knocks them from the sky. Now stranded and lost, the two now must reunite while battling everything mother nature has to throw at them, from frigid cold, to hungry wolves and bears, to the strange cosmic phenomenon that has knocked out anything and everything electric, while also unraveling the mystery of what happened to the world around them...and why they are here in the first place. At the end of the day, however, before the sun slips below the horizon and heralds forth freezing temperatures and fierce predators that they hope their fire can keep at bay through the night, only two real choices remain: Survive, or fade into The Long Dark...

, and the wiki official here