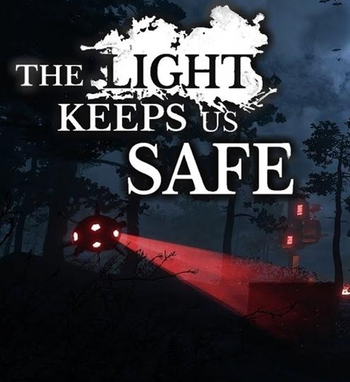 The Light Keeps Us Safe is a procedurally-generated open-world first-person Stealth-Based Game by Big Robot Ltd, the creators of Sir, You Are Being Hunted and The Signal From Tolva. It was initially launched through Steam Early Access, then had a full PC release on October 11th, 2019.
Advertisement:

In The Light Keeps Us Safe you play as the last remaining human survivor of an apocalyptic event in which mysterious, seemingly alien robots have wiped out human civilization. The rest of humanity has long since either been wiped out or "escaped into the Light" while you were hiding in a bunker, but now that your food has run out you're forced to explore the robot-infested surface for a means of survival.

It can best be summarized as a Spiritual Successor to Sir, You Are Being Hunted, only with a much more dark, serious tone, more simplified inventory management, and no weapons to fight back with. Instead, your character has access to a special flashlight with multiple light modes that can be used to overcome obstacles. The flashlight's abilities include a standard beam that temporarily disables proximity shock traps, a focused charger beam that powers doors and shuts down enemy energy orbs, a revealer beam that reveals invisible platforms and hidden enemies, and a dissolver beam that dissolves certain walls and energy field traps. Since you lack any offensive abilities to fight back against the robots, your survival options are limited to stealth, throwing bottles to distract enemies or draw them away, or running away.