Goodies in the Toilets 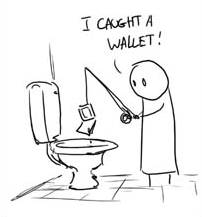 "There will always be goodies in any horror game toilets. Check them out, guaranteed to bring you happiness."
— Helloween4545, horror game LPer
Advertisement:

You're in a horror game, you're low on health and ammo and you decide to run into the bathrooms to get away from an oncoming swarm. Just when you think all hope is lost, you find ammo, health and armour discarded in the toilets.

Just when you've healed up, you turn around and a monster jumps out a previously locked stall.

This is becoming more the norm in horror video games, and most people miss it due to not needing to enter the bathrooms.

Related to Nobody Poops, in that games where the bathrooms don't contain useful items or information generally won't include such rooms at all. Compare Always Check Behind the Chair.