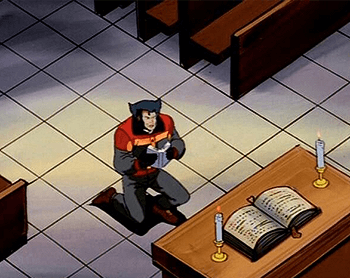 A character is stressed or scared and is confused about what to do. Things have gotten rough, and their faith is close to breaking. Or they could just be lonely and seeking a place to feel at home, and there's nothing like God's house to help them there. They often sit in a pew by themselves, thinking, or even praying to God about their situation. Sometimes a pastor comes in to talk to them, or another character from the series does. The question of why the church is being left unlocked and seemingly unsupervised even in the sort of neighbourhood where this would attract thieves and vandals is usually left unaddressed.
Advertisement:

It's a common thing in dramas and Soap Opera shows for someone to go pray alone in the hospital chapel for the deathly ill person to pull through.

Seeking Sanctuary is a different trope in which the heroes of the story are being pursued by evil forces and they run into a church for protection.

Truth in Television, obviously, particularly in the case of the hospital chapel. After all, that's why they're there.