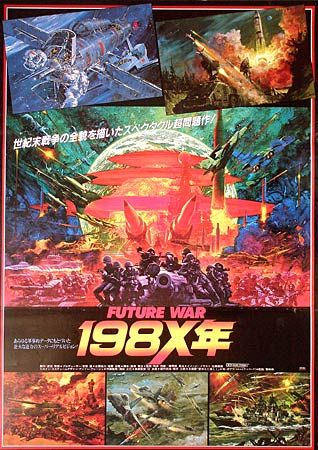 Future War 198X is a 1982 OVA released outside of Japan in 1986, loosely based on The Third World War and directed by Toshio Masuda.

The OVA tells of the events leading up to World War III and the characters it most closely affects. Burt, an American scientist, invents the Missile Defense System, making it so the USA no longer feels threatened by nuclear war. The world looks on as his test is successful. His sister and best friend, Laura and Wataru, soon find out that he has been kidnapped by Soviet spies, and after the nuking of the Russian submarine goes terribly wrong, all hell breaks loose. The events of that holiday season are seen through the eyes of the President of the United States; Michael, a British soldier; the team at the Kremlin; and Burt's closest friends.

At the time of development, Japanese citizens protested Toei Animation making the film. Such a shattering of the Nuclear Weapons Taboo had never happened. There had been The Last War and The Day After, but nothing that had so thoroughly depicted the politics and graphic aftermath.

While a 1982 calendar and a 12 track soundtrack LP were released in Japan, this OVA is incredibly hard to find. Released once on videotape in the two sides of Germany, Italy and Australia, few copies were produced due to the arthouse-filmgoer demographic not being big buyers. The European releases are just hacked up versions of the Australian, which cut 35 minutes. They didn't bother adding credits besides the Japanese ones, adding to the mystery of why Wizard Video released it at all, being a little-known horror film distributor in the first place. Thanks to Wizard Video, the movie hasn't completely faded into obscurity but is getting there. Keep Circulating the Tapes.

A detailed rundown can be found here

Not to be confused with the infamous (thanks to Mystery Science Theater 3000) live action film Future War.

Compare The Day After, Barefoot Gen, Threads, and When the Wind Blows.