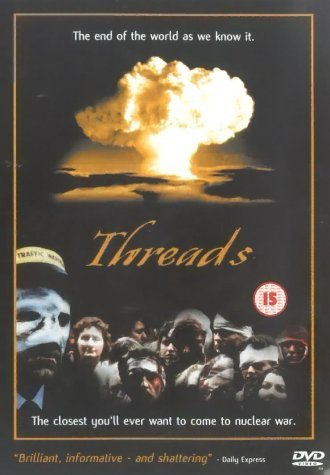 "You cannot win a nuclear war."
"In an urban society, everything connects. Each person's needs are fed by the skills of many others. Our lives are woven together in a fabric. But the connections that make society strong, also make it vulnerable."
— Opening Narration
Advertisement:

Threads, a 1984 docudrama produced by The BBC, is the United Kingdom's answer to America's The Day After (which came a year earlier). Britain has quite the history of post-apocalyptic fiction on its DVD and book shelves, and Threads is amongst the most disturbing examples.

The film depicts the terrifying consequences of nuclear warfare upon an unsuspecting world. Set mainly in Sheffield during the height of the Cold War, Threads follows two families, the Becketts and the Kemps, amongst the other members of their town, as they deal with the absolute destruction of their society as a result of nuclear war with the Soviet Union (which at the time of release was arguably more likely than it is today). The findings of the 1955 Strath Report noted that the UK was singularly vulnerable to a nuclear exchange due to the country's location, small size, high urban population, and dependency upon food imports.note  [Assuming the use of ten ten-megaton hydrogen bombs, the minimum number the report thought needed to render the UK militarily useless in a war] "Blast and heat would be the dominant hazard, accounting for more than 9 million fatal casualties against less than 3 million fatal casualties from radiation [of a total UK population of 51 million]. [...] On the basis of an attack with ten bombs we also reckon that, in addition to casualties, a further 13 million people - many of them suffering from radiation sickness - would be pinned down in their houses or shelters for at least a week. Evacuation would increase this number. [...] It would be quite unrealistic to hope to maintain anything like normal medical standards [...] the chief difficulty would be to distinguish those who, in addition to having received burns or other injuries, had also been exposed to a lethal dose of radiation and who would therefore ultimately die, and on whom it would be wasteful to expend scarce medical resources. [...] An attack upon the largest towns with ten hydrogen bombs would totally disrupt the industrial and commercial life of the country. Direct damage would be concentrated near the points of attack but these are likely to contain about one-third of the population and about half the industry. The normal communication and transport systems would come to a stop and the inability to move food, fuel, and material would also stop ordinary social and economic processes. The whole mechanism of money transactions would be disrupted. [...] Commercial stocks of food would suffer heavy loss. These losses would further deplete available supplies. In the period immediately after the attack the widespread contamination from fall-out would make internal distribution of whatever stocks were available virtually impossible in large parts of the country. People in areas of severe fall-out would, therefore, have to depend for a week or more on the food which they had stored in their shelters and homes at the time the bombs fell. [...] These considerations suggest that those who survive the attack would have to live for a considerable period under siege conditions, and that the risk of starvation would be very real unless as substantial strategic reserve of food had been accumulated and distributed about the country in peace. It would, moreover, be essential that the Government should be in a position to take immediate and effective control over all food stocks and over their distribution. [...] The initial phase of attack would be succeeded by a critical period during which the surviving population would be struggling against disease, starvation, and the unimaginable psychological effects of nuclear bombardment. But provided what was left of the nation could get through that period and the survivors were able to devote their resources to the work of reorganising the country, they should eventually be able to produce a wide enough range of goods to meet ordinary civilian needs. The standard of living of the reduced population, althrough substantially lower than at present, would still be well above that of the greater part of the world. [...] there would be no hope of providing anything approaching peacetime standards of medical care [...] Research should be carried forward into methods of decontaminating water [even today there are no practical ones] [...] Plans should be made for the emergency distribution of limited supplies of drinking water pending the restoration of mains supplies [...] Plans should be prepared to enable the police and the courts to operate quickly and effectively under the conditions foreseen [...] In some parts of the country, particularly if several bombs fell in the same area, there might be complete chaos for a time and civil control would collapse. In such circumstances the local military commander would have to be prepared to take over from the civil authority responsibility for the maintenance of law and order and for the administration of Government. He would, if called upon, exercise his existing common-law powers to take whatever steps, however drastic, he considered necessary to restore order. [...] The ordinary machinery of the courts and prisons could not operate. Plans were made during the last war for "war zone courts" to function in areas which were involved in military operations. These plans should now be examined to see if a simple scheme could be worked out for the prompt dismissal of criminal cases." The film reflects this fairly accurate assessment of the UK's likely situation with what the uninformed might call a hopeless and pessimistic outset - ending with a medieval world where agriculture predominates, starvation is ever-present, modern medicine doesn't exist, martial law prevails, capital punishment is routine, children are undereducated savages, the ozone layer is gone, and Survival Of The Fittest is the only way to get by.

To any would-be viewers: if you're looking for a story with a happy or hopeful ending this movie is not the way to go, and a strong stomach is pretty much mandatory. There are no jump scares, the Body Horror is tame by the standards of modern SFX, and there is little Gornnote Though lots of Scenery Gorn despite the ample opportunities the setting presents. Yet its strict adherence to a realistic portrayal of nuclear war and its after-effects makes it one of the scariest films ever made.

A director-approved remastered edition of the film was released on DVD by Simply Media Entertainment in 2018.

See also The War Game, The Day Called 'X', Sometime Never: A Fable for Supermen, When the Wind Blows, and The Road.

In the aftermath of a nuclear attack on Sheffield, wounded survivors converge on a working hospital in search of help - only to find that without supplies, electricity or even a semblance of hygiene, any help the hospital offers is going to be crude, painful and possibly deadly.

In the aftermath of a nuclear attack on Sheffield, wounded survivors converge on a working hospital in search of help - only to find that without supplies, electricity or even a semblance of hygiene, any help the hospital offers is going to be crude, painful and possibly deadly.