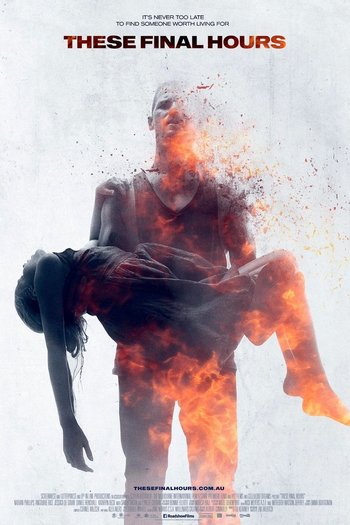 These Final Hours is a 2014 Australian film directed by Zak Hilditch. It's The End of the World as We Know It and a wall of fire will engulf the city of Perth in approximately 12 hours. James (Nathan Phillips; Wolf Creek, Neighbours, Snakes on a Plane) is a carefree party guy making his way across the outer suburbs to an "end of the world" party hosted by his mate Freddy (Daniel Henshall; Snowtown) when he suddenly decides to rescue a little girl named Rose (Angourie Rice) who is desperately searching for her father. After some initial hesitation, James decides to help her out on his way to the party and in doing so is forced to consider what is really important in his final moments.

The film premiered at the Melbourne International Film Festival, was selected as part of the Directors' Fortnight section of the 2014 Cannes Film Festival, was picked up for distribution by Village Roadshow and released in Australian cinemas on July 31, 2014.