Literature / On the Beach 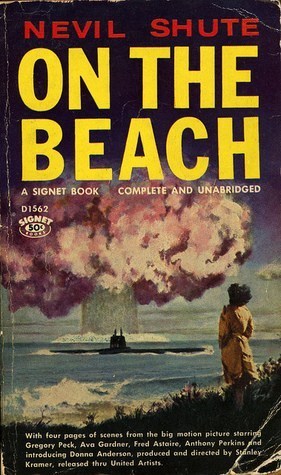 On the Beach is a 1957 novel by Nevil Shute that explores the aftermath of a nuclear war that wiped out all life in the northern hemisphere. The southern hemisphere was left untouched by the bombs, but not the fallout: each year more radioactive material is moved south by seasonal winds, and as the fallout accumulates, life slowly dies off, latitude by crawling latitude.

The story follows a group of people in Melbourne, Australia who go on about their lives as they wait for the inevitable end. With only a handful of years left, desperation is sliding into acceptance. When a Morse-like code is received and identified as coming all the way from Seattle, a stranded US submarine is sent to investigate this glimmer of hope - small and unlikely though it is.

The book was adapted into two movies by the same name, first in 1959 and then in 2000. The 1959 version was directed by Stanley Kramer and starred Gregory Peck, Ava Gardner, Fred Astaire, and a pre-Psycho Anthony Perkins, who struggles with an Australian accent. The first movie has inspired the Strugatsky Brothers to write Far Rainbow in 1962.

Not to be confused with Beach Episode, or at least not what normally comes to mind when one thinks of that. It has nothing to do with bikini girls, and is anything but upbeat. It's also unrelated to the Neil Young album of the same name.

Tropes featured in the book or movie include:

Alternative Title(s): On The Beach