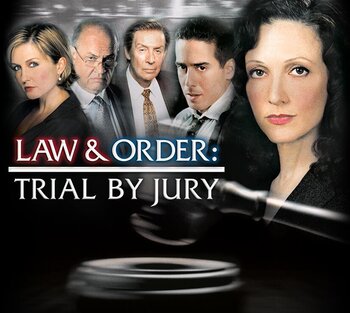 "In the criminal justice system, all defendants are innocent until proven guilty, either by confession, plea bargain, or trial by jury. This is one of those trials."
Advertisement:

Law & Order: Trial by Jury (2005-2006) is a short-lived spinoff of the original Law & Order. Whereas the other spinoffs focused more on the detectives, Trial by Jury focused on the ADAs and court proceedings of a criminal investigation. The show starred Bebe Neuwirth as Homice Bureau Chief Tracey Kibre, and Amy Carlson as her assistant Kelly Gaffney.