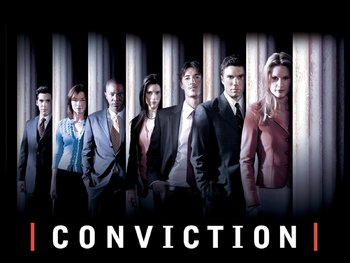 Conviction (2006) is a short-lived Law & Order spinoff starring Stephanie March as Alex Cabot, formerly of Law & Order: Special Victims Unit, now the bureau chief of the District Attorney's office. Like Law & Order: Trial by Jury, it focused on the Law Procedural side of the story, although it spent more time exploring the characters' personal drama than other Law & Order series.

The series was canceled after only 13 episodes. Two of the actors went on to become regulars in other Law & Order series: Milena Govich as Det. Nina Cassady in Law & Order's 17th season and Julianne Nicholson as Megan Wheeler on Law & Order: Criminal Intent.

Not to be confused with the 2004 British crime drama

Conviction or the 2016 ABC series of the same name.