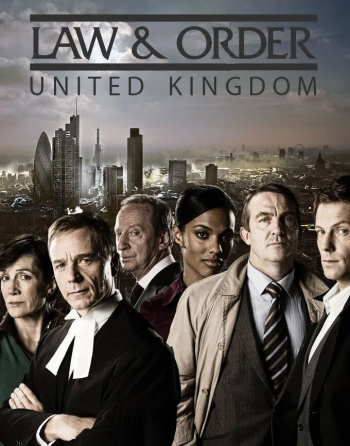 "In the criminal justice system, the people are represented by two separate, yet equally important, groups: the police who investigate crimes, and the Crown Prosecutors who prosecute the offenders. These are their stories."
Advertisement:

A remake of Law & Order (2009-2014), set in the UK, specifically London (it had a Working Title of Law & Order: London) by Chris Chibnall (of Torchwood and Doctor Who fame). Since October 2010 the series has aired for North American audiences on BBC America.

Each episode was a remake of an episode of the original series, with the stories updated for the modern day and the UK legal system (a task the writers found harder than they'd thought - you can't chuck Felony Murder at people in the UK.note Or plausibly (thanks to the UK's much stricter gun control laws) have the Spouse/Parent/Lover/Neighbor/BFF of the victim show up on the courthouse steps with a handgun to kill the baddie every time they appear to get off, although they still managed to have a fair number of episodes with guns used for homicide. The episodes were based on:

The "Law" included Jamie Bamber (then Paul Nicholls, then Ben Bailey Smith) and Bradley Walsh as DS Ronnie Brooks (previously known for Coronation Street) Playing Against Type as a detective, and the "Order" includes Ben Daniels (then Dominic Rowan), Freema Agyeman (then Georgia Taylor), and Bill Paterson (then Peter Davison).

Reading the section on British Coppers is recommended for international viewers.

On 4 June 2014, ITV announced that the show would be 'rested' after Bradley Walsh chose to leave the show and "Repeat to Fade" would be the final episode for the "foreseeable future".