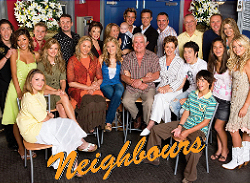 The most dangerous residential area on earth and Melbourne, Australia's answer to the Bermuda Triangle, Neighbours follows the lives of the residents of Ramsay Street, a street in the fictional suburb of Erinsborough. Originally the show featured two main families, the Ramsays (who the street is named after) and Robinsons but gradually the Ramsays have faded away to be replaced by other families such as the Kennedys and Scullys.

Premiering in 1985, it's the oldest of the two main Australian soap operas, the other being Home and Away. Primarily known as the series that launched many a career, from Margot Robbie, to Russell Crowe, to Chris Hemsworth, and most famously, Kylie Minogue, whose character Charlene's 1987 wedding to Jason Donovan's Scott became the signature moment of the series.

Not to be confused with a Tommy Wiseau sitcom, a show about aliens landing in New Jersey, or with the various films titled Neighbors.