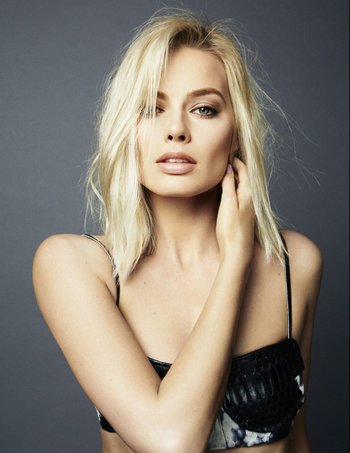 Margot Elise Robbie (born 2 July 1990 in Dalby) is an Australian actress and producer.

She started off in Australian independent films before joining the cast of Neighbours. Following her move to the United States, she starred in the short-lived flight attendant drama Pan Am.

She reached fame with her role in Martin Scorsese's well-received The Wolf of Wall Street, for which she gained critical acclaim. Her following breakout role came from portraying the first live-action film version of perennial DC Comics Ensemble Dark Horse Harley Quinn in David Ayer's Suicide Squad. She also has appeared on Saturday Night Live. She eventually got nominated at the Oscars for her acclaimed role of Tonya Harding in I, Tonya. In 2020, she signed on to star in an upcoming spinoff of the Pirates of the Caribbean series.