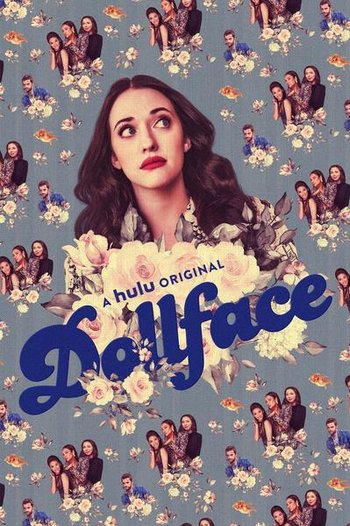 Dollface is a 2019 comedy series on Hulu that was created by Jordan Weiss and executive produced by Margot Robbie.

Jules Wiley (Kat Dennings) has been with her boyfriend Jeremy for five years, neglecting her other female friendships with Madison Maxwell (Brenda Song) and Stella Cole (Shay Mitchell). But when Jeremy unexpectedly dumps her, she finds that going back to those friends is harder than she thinks, as she's practically been out of their lives for five years and she has to face down her own introverted nature, while simultaneously having Imagine Spots of an old Cat Lady (Beth Grant) guiding her through her life.

Jules also works at a female beauty company called Woöm where she has to deal with her co-workers Alison B (Brianne Howey), Alison S. (Vella Lovell), and Izzy (Esther Povitsky), who is making everyone believe she is actually named Alison, too. Between her work and her friends, Jules will have to navigate this thing called "female friendship" and work out what she wants from her own life.

The first season premiered on Hulu on November 15, 2019. A second season is due to premiere in February 2022.