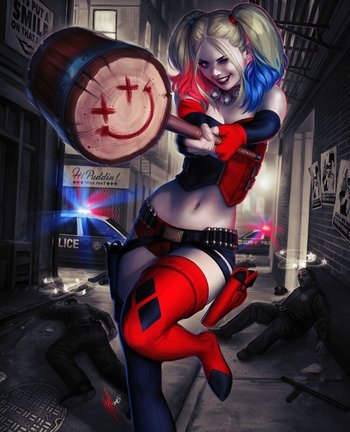 "You think I'm just a doll. A doll that's pink and light. A doll you can arrange any way you like. You're wrong."

The first series lasted for 38 issues, from December 2000 to January 2004, plus a special tying in with the Our Worlds at War event, with the complete run collected in graphic novels. Initially it was written by Karl Kesel, with A. J. Lieberman taking over for the last year or so.

The series begins when, after a failed scheme, The Joker gets so pissed at Harley that he kicks her out of his gang — the rest of the series deals with Harley trying to make it on her own. Initially she tries freelance henching, but that doesn't exactly work out, so she starts her own gang instead. With... mixed results.

A running theme in the first part is Harley's childlike inability to take responsibility for her own actions, or even acknowledge/realize any consequences besides her having fun, which reaches Tear Jerker levels at times, though the comic itself is more than a little madcap. Also heavily involved is Harley's love of Love, and her being willing to do pretty much anything in the name of it.

The last set of storylines, following the change in writers, happen after a time skip and feature a noticeable Genre Shift to a more noirish style, downplaying Harley's cheery quirks and madcap adventures and instead playing her more like a jaded expy of Catwoman. This did not last.

In true tradition of the Batman side-comics, the Caped Crusader himself does not appear very often, nor, interestingly enough, does the Joker beyond the first issue or so.

Note that the title character predates this series. She had debuted in Batman: The Animated Series in 1992. Her first comic book appearance was in The Batman Adventures #12 (September, 1993). Her introduction to the mainstream DC universe took place in the one-shot Batman: Harley Quinn (October, 1999).

Harley got a second series in the New 52, which ran for 31 issues from November 2013 to July 2016, and had a number of specials. It was written by Jimmy Palmiotti and Amanda Conner of Power Girl fame, and follows Harley and her antics on Coney Island after she inherits an apartment complex there.

In June 2015, it got a Spin-Off miniseries by Palmiotti, Conner, and Justin Gray, Harley Quinn/Power Girl, recounting a lost adventure set during the duo's partnership in the main series, featuring Vartox of Power Girl fame. In December of the same year, DC launched a second spin-off miniseries called Harley's Little Black Book, by Palmiotti and Conner, a The Brave and the Bold-style Team-Up Series that features Harley partnering with a different DC hero or villain in each issue. In April 2016, it got a third spin-off, the miniseries Harley Quinn and Her Gang of Harleys, written by Palmiotti and Frank Tieri.

The series was relaunched in August 2016 as part of DC Rebirth, now twice-monthly and with a new #1 issue, but as a seamless continuation of the previous series with hardly any changes, keeping Palmiotti and Conner as writers, and Harley on Coney Island with the same supporting cast. Connor and Palmiotti left after issue #35; from issue #36, Frank Tieri took over as writer for seven issues and Christopher Sabela for two, before Sam Humphries became the new ongoing writer with #45. The series went monthly again from issue #57. The series ended with #75.

2018 saw a further spin-off miniseries by Tieri, Old Lady Harley, returning to the parody post-apocalyptic Bad Future depicted in #42. 2019 saw the spin-off miniseries Harley Quinn and Poison Ivy, and quite a lot of non-continuity Harley miniseries and graphic novels for DC's specialist imprints: Harley Quinn: Breaking Glass for DC Ink, which features Harley and a... very unusual version of the Joker as contemporary left-wing political activists; Harleen for DC Black Label, a new retelling of Harley's origin by Stjepan Seijic; and Joker/Harley: Criminal Sanity, a DC Black Label miniseries set in a non-superhero universe with the Joker as a mundane serial killer and Harleen as a police profiler on his trail. 2020 saw another mini-series, Harley Quinn and the Birds of Prey, written by Conner and Palmiotti with, for the first time, interior art by Conner; this was made to tie in with the film Birds of Prey (2020), featuring Harley with the Birds team as depicted in the film of Renee Montoya, Black Canary, Huntress, and Cassandra Cain.

In 2021, the series was relaunched from #1 again, with Stephanie Phillips as writer and Riley Rossmo as main artist. In contrast to the previous couple of runs, this one was much more strongly tied in to the continuity of Batman-related titles, featuring Harley returning to Gotham and attempting to make up for her past actions, while clashing with her new Evil Counterpart Punchline.

Note: This isn't a character page. This page is about Harley's various solo series and the tropes therein. For character tropes related to all appearances by The DCU incarnation of the character, see Characters.Batman Rogues Gallery Part 1. Or you can just ask her yourself. The original version can be found here.

These series provides examples of: 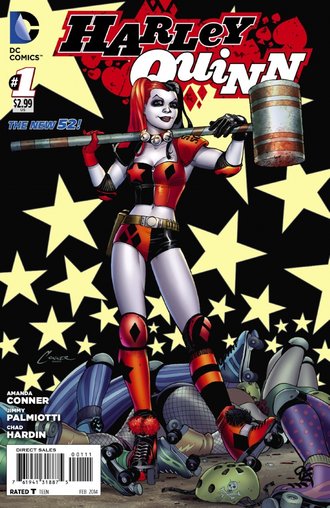