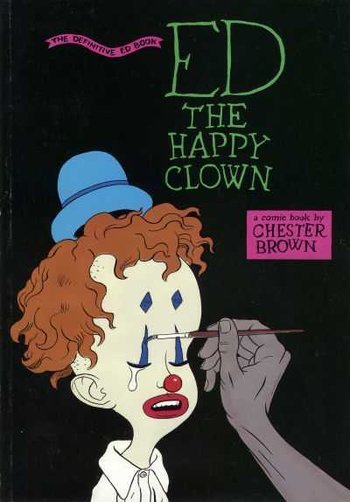 Ed the Happy Clown is a Canadian underground comic by Chester Brown, originally published in his comics series Yummy Fur, first as self-published minicomics from 1983 to 1985, then published through Vortex Comics from 1986 to 1989. It was entirely improvised by Brown as he went along, creating a strange and surreal story that goes through several bizarre twists and turns. This also means that at times it is shockingly vulgar, so the grosser bits will be spoilered out in order to preserve family friendliness.

The story consists of Ed, the eponymous clown, who is framed for stealing and cutting off the hand of Chet Doodie, a janitor at the hospital. However, Ed escapes the prison when a man in the cell next to him who can't stop pooping breaks the cell with the sheer amount of fecal matter he's discharging, before collapsing.

Meanwhile, Chet, an adulterer, has decided that losing his hand was a sign from God to atone for his sins. He decides to do this by seducing and murdering his girlfriend, Josie, then atoning for his sins. Unfortunately, Josie discovers that being killed while in the act of sinning turns you into a vampire, and she is now one of the living dead.

Both Josie's and Ed's bodies are stolen by sewer-dwelling pygmies, who planned to eat them. However, it is discovered that the head of a miniature Ronald Reagan has become attached to Ed's body, namely, to his penis. This is enough to cause the pygmies to pause as they consider this a sign from their penis god, and Ed, Ronald Reagan, and Josie are able to escape into even weirder adventures...