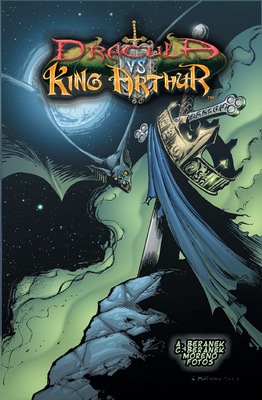 Dracula vs. King Arthur is a four-issue indie comic book mini series by Adam and Christian Beranek with art by Chris Moreno

Vlad Dracula, having made a pact with Lucifer to turn himself into a vampire, is in the final days of the Turkish war. Knowing he can't win, he waits at his castle for his enemies to slay him. But Lucifer changes his mind with a plan to send him back in time to the days of Camelot where vampirism is unknown and he can easily take over the land and soon the world along with it. Indeed once Dracula arrive in the medieval times he begins turning the subjects of the land. King Arthur and his knights soon become aware of this and prepare to defend the kingdom, but against such an unknown enemy that can subjugate their forces. Do they even have a chance of stopping him?