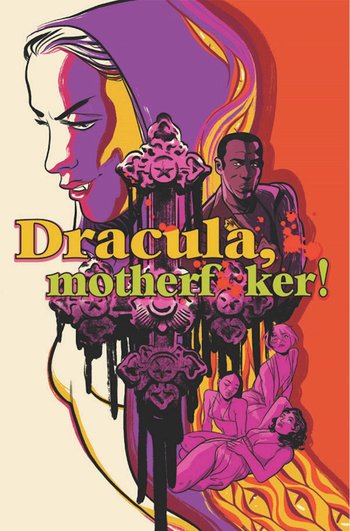 Quincy Harker and the Brides.
But all things must end. Empires. Reigns. Marriages.
Advertisement:

Dracula, motherf**ker! is a 2020 horror noir graphic novel published by Image Comics. It was written by Alex de Campi and illustrated by Erica Henderson.

In Vienna, 1889, the three Brides of Dracula finally get tired of him and nail him to the bottom of a coffin and seal it, content to let him rot for an eternity.

In Los Angeles, 1974, at a party, fading actress Bebe Beauland decides to raise the stakes and reawakens Dracula in an attempt to recapture her youth. What happens next leaves a horrific crime scene, one captured on film by crime photographer Quincy Harker. But while he captures a photograph of a decidedly deceased Bebe Beauland, it turns out that she isn't dead after all. Or is she?

Now, hunted by a creature of darkness, will Quincy accept the help of Dracula's ex-Brides? Or do the three of them merely want to use him as bait?

Described as a "pulpy, pulse-pounding graphic novel of California psych-horror."