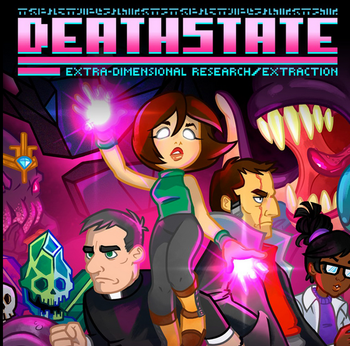 Deathstate is a Bullet Hell Roguelike game with heavy Lovecraftian themes, chock full of all sorts of imagery that reeks of good old Cosmic Horror. It was developed by the Bread Machine Games and released on Steam for the PC on the 20th of October, 2015, and ported to Playstation 4 on April 25th, 2017.
Advertisement:

In Deathstate, you take on one of multiple playable characters, each with their unique starting stats and abilities and collect a variety of weapons, followers, and organs (yes, you heard that right) to grow progressively stronger over the course of a given run… Unless you pick the Starcreep. Then no organs for you, unless you pick up an item that turns you into another character that CAN use organs. Your objective is to reach the eponymous Deathstate and discover what happened to the Professor who was researching the object; he went into a portal and never returned.

The game and its rather cool soundtrack can be obtained here.