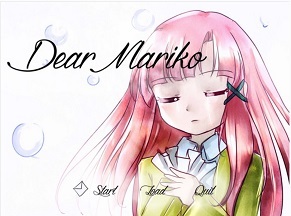 Dear Mariko is a short, simple game by Soyasushi Productions about a girl who comes home to find a goodbye letter from the one she loves.

Mariko and Darien are a happy couple who are unfortunately dealing with a sinister stalker, Shinku. The stalker has strained their relationship, and one day Darien decides he cannot take it any more. One day, Mariko decides to come home to find Darien. You are able to control the protagonist around the house and have her examine the items filled with memories of her beloved one. Upon going into the bedroom, she will find the letter that Darien left before disappearing from the house. That's when a scary girl shows up at the door- the stalker has infiltrated the house and is out to kill Mariko.

There are 3 different endings for you to explore: the Normal Ending, Bad Ending and True Ending. Different requirements have to be met and actions taken to achieve all of the endings. It is difficult to mention tropes without spoiling the twist in the True Ending, so be warned before reading beyond this point.

In addition, there is now an expansion, Dear Mariko: Crimson, that contains an epilogue with 4 additional endings.