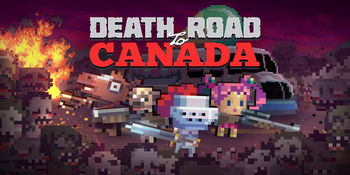 Death Road to Canada is a self described "road trip simulator"; a Roguelike with RPG Elements, and an The Oregon Trail hybrid mixed together with zombies, dogs, jerks, and otakus. It was developed by Rocketcat Games, who received funding on Kickstarter on September 27th, 2013, and initially released the game on PC through Steam on July 22nd, 2016. It was then ported to iOS devices on March 22nd, 2017, and then to Playstation 4, Xbox One and Nintendo Switch on May 8th, 2018.

Long story short, the zombie apocalypse has broken out in the United States. Don't bother asking any who, what, where, or why questions, because it suddenly happened. Since nobody wants to be a walking corpse with a taste for human flesh, it's up to you and/or someone else to leave the lovely, yet infected state of Florida and fight your way up to the home of maple syrup, mounted police, socialized health care, and poutine. The idea of a road trip sounds better than anything else right now…

The main goal is to get a group of survivors to travel across the East Coast in order to enter Canada (which has not struggled with the undead, strangely enough). During the journey, the player and up to 3 NPC allies must fight against zombies and loot different areas in order to survive the trip. Along the way, the group will encounter unique characters and events, depending on how the Random Number God feels.

Despite the subject matter, Death Road to Canada has a lighthearted tone; gore is featured in a "cutesy" style and the Steam store page itself describes it as the "most family friendly zombie apocalypse game on the market!". It doesn't take long to see that the game doesn't take itself seriously, you'll meet a lot of people, face moral dilemmas, like who should take blame for a fart, or should you share a fun sized candy bar or eat it alone. And lastly, have the opportunity to tell other people to COOL IT.