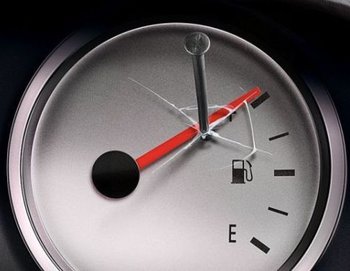 Simply tying the needle so it would stay at full just doesn't make it infinitely full. Or so we wished.
In real life, we obviously have to top up our car's fuel every now and then. But in video games, this isn't usually the case, no matter how jarring it would be. As an Acceptable Break from Reality, game developers tend to make use of this trope for practical reasons, mostly to simplify gameplay or to make it more accessible and keep things as well-paced as possible, though in some games fuel is implemented either as a glorified countdown timer, as in the case of arcade games where play time is limited to a few minutes, or to add immersion or realism and thus an element of strategy such as in a survival game where conserving resources is a must. Certain titles however would have vehicles slow down to a crawl instead of going to a complete stop, perhaps as a milder penalty compared to a Game Over or being stuck in a race.
Advertisement:

This is fairly common in most games, so only exceptions, inversions or non-standard examples may be listed. Compare Automaton Horses for when the same basic principle is applied to animals instead of vehicles.