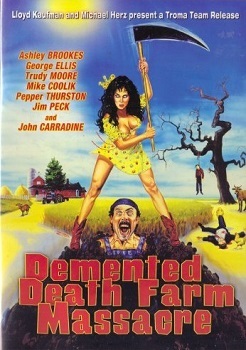 Sometimes, it's not enough for a horror movie to have a frightening premise. It has to scare its prospective audience right there in the title! This mentality leads to a title with so many "scary" words or phrases that it becomes ridiculously redundant, a la Ultra Super Death Gore Fest Chainsawer 3000. Often, the title doesn't even make sense when held up to scrutiny. (Try to visualize some of the examples below...though it might be best if you didn't.) In brief, instead of frightening potential viewers, these titles provoke the reaction "Eww!" or "What the hell is this movie about?"

This trope was a hallmark of B Movies and Splatter Horror, which used over-the-top gore and mayhem as a selling point, even when there was little to be seen. A subtrope of Intentionally Awkward Title, where the over-the-top title is used but not necessarily with violence. Compare the Mad Lib Thriller Title and the Mad Lib Fantasy Title.

In practice, the trope usually inspires Squick or Narm rather than fear. It also tends to involve the Department of Redundancy Department. Related to Long Title and Overly Long Gag.